Anna Dvorak: The junior with an interest in set design 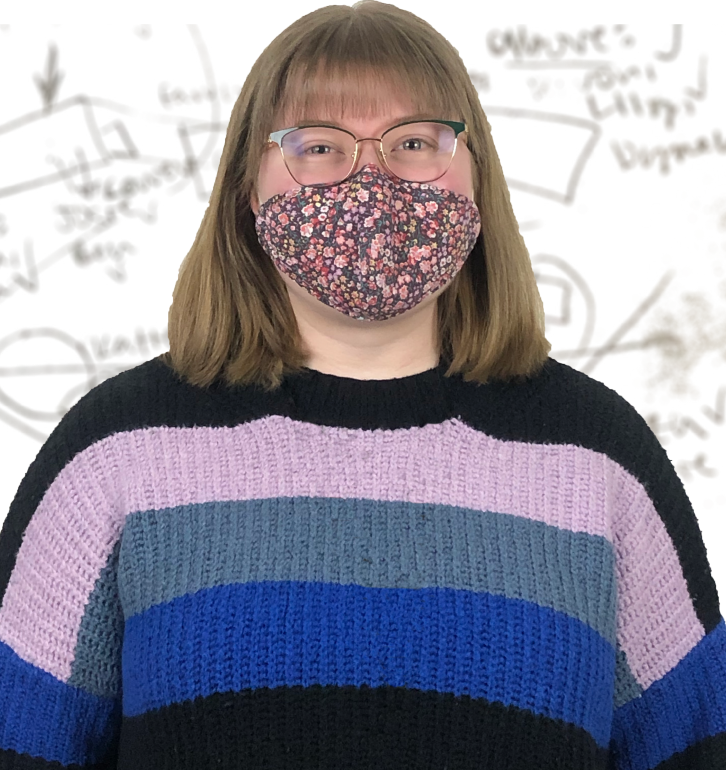 Anna Dvorak in front of some of her notes from designing the set for Rabbit.

Anna Dvorak (11) has been part of the Lincoln Southeast High School (LSE) Drama Department since her freshman year. This year she has taken on a big role as the Assistant Set Designer for the upcoming Spring Musical “Little Women”. As the assistant set designer she will use her creativity to decorate the set with props. Like filling a brand new house with all your furniture.

She is currently a Drama Club officer and has been inducted into the Thespian Troupe 2106. She is also a recipient of the Nebraska Young Artist Award, presented by the Hixson-Lied College of Fine and Performing Arts. Her first involvement in a LSE theater production was during her freshman fall play “She Kills Monsters’’. She helped out with the after school tech. At after school tech any student wanting to help out with no time commitment can come build and paint set pieces.

However, the first time she was officially involved in a production was during the “Nite of Knights” variety show in Fall of 2018. For the show she was on Run Crew, where students help move on and off set pieces, which can range anywhere from a book to an entire wall.

She got her first leadership position in the Drama program when she became the Assistant Stage Manager for the musical “Freaky Friday” during her freshman year. As an Assistant Stage Manager, Dvorak had to take attendance, take line notes and make sure all the actors knew what was going on, with her biggest responsibility being “calling the show”. When students “call” a show, they use a headset to communicate predetermined cues with our Lights and Sound board operators and make sure the Run Crew is doing their job.

Dvorak determined that she would only Stage Manage one show a year, because “two shows a year was just too much with everything else [she was] doing.”

When Dvorak was filling out the tech interest form for this school year’s Collection of One Acts, she decided to select “Set Design” as an interest. Then, Theater Program Director Tyler Lambley and the Technical Director Heather Hillhouse approached her about designing the set for “Rabbit”, one of the One Acts in the collection, and noted that they had not had a student set designer in a while. She accepted.

The script for “Rabbit” did not include notes on what the show really needed to look like, so Dvorak was allowed to use her imagination to create the set. Throughout her design process she used the application Pinterest to find ideas and inspiration for what would eventually become the final set design for the show. She also interviewed various actors in the production to ask about what they want in their personal area of the set.

“Rabbit” is about a group of young adults who have grown up without the guidance of adults. Set approximately ten years after “the bomb” which killed their parents. Living out of a rough shelter, with no food or water. The group must find out who killed the rabbit they had planned to eat. As the group investigates into who killed the rabbit, the audience sees the “destruction of human character… as social standards are lost in a struggle for power and survival.”

In the end, the set mainly consisted of large scaffolding, clothing racks, a stack of rehearsal cubes and a chair. But a majority of the work was done with set dressing to attain a dystopian aesthetic. Dvorak used sheets, blankets, paint tarps, old clothing, rope, toys, keys and other items to achieve the look she wanted.

“The [set] designer has a lot of time to design and more time to build. However the design isn’t finished until the performance [night],” Dvorak said.

Dvorak has also accepted responsibility as the Assistant Set Designer for the upcoming Spring Musical “Little Women”. This time she is working with a professional set designer, Brenda Davis, to put together an even larger and more elaborate set. Dvorak and Davis will work as a team, along with Lambley and Hillhouse, to finalize a design.

Davis has a Bachelor’s degree in Theater from Loyola University Chicago and a Masters degree in Fine Arts from the Yale School of Drama. She has been the lead set designer for shows like “One Night in Miami” and “The House of Blue Leaves”. Assistant/Associate work for shows like “Metamorphoses”, which won a Tony nomination for Best set design.

So far Dvorak has been able to do a lot of research on set dressing while Davis has been doing a lot of design for the physical set. This is also due to the fact that Davis has already created a model of the set and one of her graduate students has started to create drafts of a ground plan. Soon Dvoark will be going to the University of Nebraska-Lincoln with Davis to pick out some set pieces, otherwise known as props, to dress the set with sofas, rugs and other things.

“Most of the [set] design process happens before a cast is chosen or student crew heads are given scripts” Dvorak said.

Dvoark has watched Davis use the same basic steps she has learned from Hillhouse, and used herself, when working on other projects. For “Little Women” she has done a lot of preliminary research on the time period. She also enjoys listening in on the conversations that professional designers have with their technical directors, and the negotiations they have. Dvoark said that she can’t wait to see more of Davis’s design process as they continue to plan, build and dress the set.