Mirabelle Hesse: One of two freshmen on Girl’s Varsity Soccer 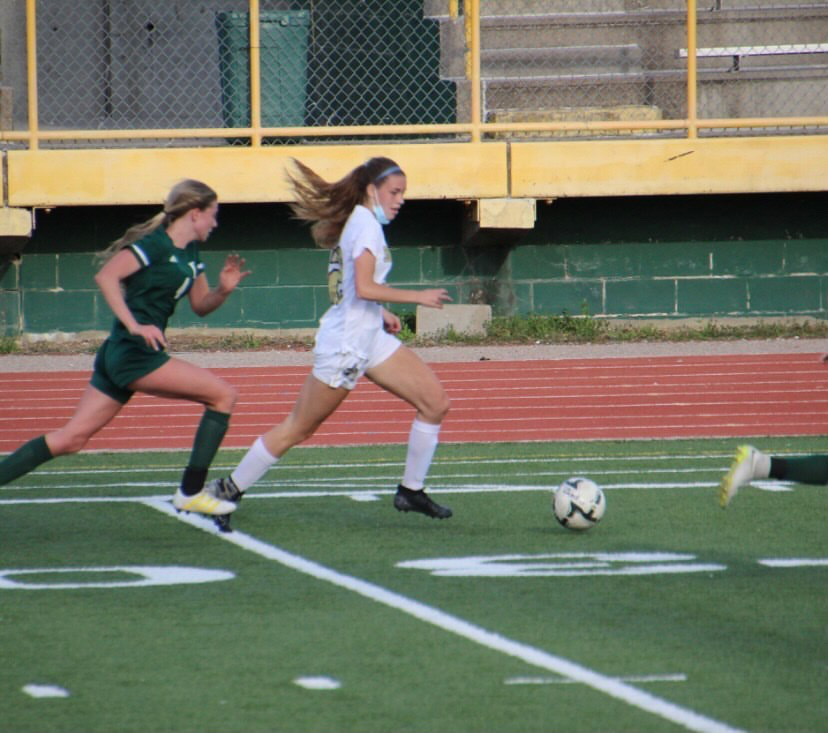 Mirabelle Hesse running the ball down the field. Courtesy of Brittany Ohlmann.

Lincoln Southeast (LSE) freshman Mirabelle Hesse is involved in both Varsity Soccer and Varsity Cross Country this year. She finds it challenging to balance her activities and academics, but still finds time to spend with her friends and family.

“Any free time that I have I usually spend catching up on assignments or studying because of the school I’ve missed,” Hesse said.

Hesse’s interest in soccer first started when she was in elementary school, which then continued into middle school where most of her friends were playing for the club team Villarreal Nebraska. She tried out and made the top team, playing throughout the fall and winter seasons. Hesse also plays violin for the LSE Orchestra and the Lincoln Youth symphony (LYS).

“I thought it would be really fun to play high school soccer [with my friends from LYS],” Hesse said.

Hesse’s favorite game was against Norfolk. According to Hesse the game was “super rainy” and she enjoyed the ride there with the team. However, her team’s first game was against North Platte, she got to be a starter. She felt a lot of pressure to play well as she wanted to show people that she earned her spot. But now that they are into the season she is a lot more comfortable with her teammates.

While the first days of practice were a little difficult for Hesse, she adjusted quickly. She also says that the upperclassmen were very welcoming and she has made a lot of good friends. This is in due part to the coach Liz Sundberg, who makes it a priority for the team to have good relationships with one-another.

“I believe we have a pretty solid team right now, and as the years go on and we get more players,” Hesse said. “Southeast should win state, or come close to it.”

Hesse is glad to be part of such an accepting team, and is hoping to continue playing in college. The team is currently 4-2 and are ranked fourth in the Heartland Athletic Conference. She is excited to see what the future of the team looks like and would love to see the team win state in her time at LSE.